Methods: The analytical performances of the developed method were carefully examined. When the concentration of BPA changed from 0.1 µM to 20 µM, the current response of BPA was linearly related to the concentration over the range of 0.1–2 µM and 2.0–20 µM, respectively and the detection limit of the suggested method was found to be 0.06 µM. The feasibility of the detector was successfully demonstrated for BPA detection in various real samples.

Results: The suggested methodology was applied for the detection of BPA in different real samples (bottled water, tap water and honey sample). The samples were prepared as described above and these aforesaid samples were analyzed directly. Since no BPA was detected in these samples, standard addition method was employed. The percent recovery tests were also investigated by measuring the current responses to the samples in which the known concentrations of BPA standard solution were spiked. Thus, the spikes are subjected to similar matrix effects. The percent recoveries in the range of 94.0%– 103% were obtained. These consequences indicated that the poly(CTA)/GCE has adequate electroanalytical efficiency and it can be a feasible sensor for detection of BPA in different samples.

Conclusion: A new voltammetric sensor for the detection of BPA was developed based on a very simple preparation scheme consisting in the direct electropolymerization of poly(CTA) films on GCE. The proposed poly(CTA)/GCE displays a helpful and easy method for observing of BPA in real aqueous samples exhibiting an adequate electroanalytical performance (linearity, detection limit, sensitivity, and selectivity) due to its stability and reproducibility associated with an effortless and speedy fabrication, and low cost. This new method could offer a charming approach for on-site detection of trace BPA contamination in aqueous samples. 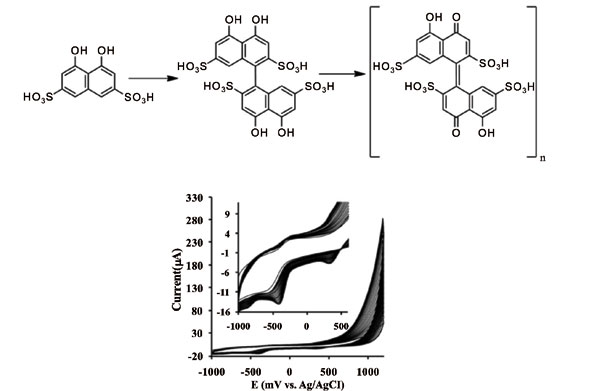