Simultaneous Determination of Simvastatin with Caffeine in Bulk Drug, Formulation and their Monitoring in Mice Plasma Through HPLC-PDA Technique


Objective: A simple, economical and rapid RP-HPLC method with PDA detector was developed and validated for the simultaneous determination of simvastatin and caffeine in pure form, in formulation and the method is applied to monitor these drugs in mice plasma. Caffeine containing food and drugs commonly co-administered with statins, there is also a possibility of the caffeine-statins combination as anti-influenza formulation implies a need for a reliable HPLC method for the simultaneous determination of these drugs.

Method: In the present work, the separation was carried out using methanol: water (90:10 v/v) as mobile phase at pH of 3.5 adjusted using phosphoric acid. At room temperature, isocratic separation carried out on C18 XBrigde™ column (5 µm, 25x0.46 cm) at a flow rate of 1 mLmin-1 and drugs were detected at 230 nm by using a PDA detector. The established method was validated with respect to linearity, specificity, precision, accuracy and limits of detection and quantification.

Results: The method was linear at a concentration range of 5-50 µgmL-1 for both drugs with calculated limit of detection of 0.025 and 0.059 µgmL-1 for simvastatin and caffeine, respectively. This method was also successfully applied for the monitoring of these drugs in mice plasma.

Conclusion: The present study suggests that the simultaneous determination of simvastatin and caffeine will be helpful to pharmaceutical manufacturing companies and clinicians checking for drug-drug interactions and could save expenses in case of future combination determination. 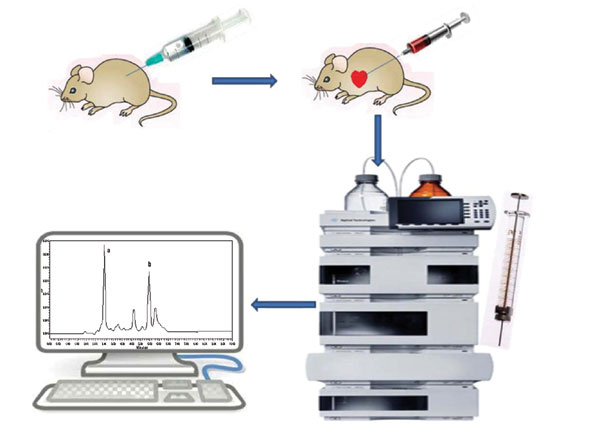