Background: Anthrax Lethal Factor (ANT) is the dominant virulence factor produced by B. anthracis and is the major cause of death of infected animals. In this paper, pencil graphite electrodes GE were modified with single-walled and multi-walled carbon nanotubes (CNTs) for the detection of hybridization related to the ANT DNA for the first time in the literature.

Methods: The electrochemical monitoring of label-free DNA hybridization related to ANT DNA was explored using both SCNT and MCNT modified PGEs with differential pulse voltammetry (DPV). The performance characteristics of ANT-DNA hybridization on disposable GEs were explored by measuring the guanine signal in terms of optimum analytical conditions; the concentration of SCNT and MCNT, the concentrations of probe and target, and also the hybridization time. Under the optimum conditions, the selectivity of probe modified electrodes was tested and the detection limit was calculated.

Results: The selectivity of ANT probes immobilized onto MCNT-GEs was tested in the presence of hybridization of probe with NC no response was observed and with MM, smaller responses were observed in comparison to full-match DNA hybridization case. Even though there are unwanted substituents in the mixture samples containing both the target and NC in the ratio 1:1 and both the target and MM in the ratio 1:1, it has been found that ANT probe immobilized CNT modified graphite sensor can also select its target by resulting with 20.9% decreased response in comparison to the one measured in the case of full-match DNA hybridization case Therefore, it was concluded that the detection of direct DNA hybridization was performed by using MCNT-GEs with an acceptable selectivity.

Conclusion: Disposable SCNT/MCNT modified GEs bring some important advantages to our assay including easy use, cost-effectiveness and giving a response in a shorter time compared to unmodified PGE, carbon paste electrode and glassy carbon electrode developed for electrochemical monitoring of DNA hybridization. Consequently, the detection of DNA hybridization related to the ANT DNA by MCNT modified sensors was performed by using lower CNT, probe and target concentrations, in a shorter hybridization time and resulting in a lower detection limit according to the SCNT modified sensors. In conclusion, MCNT modified sensors can yield the possibilities leading to the development of nucleic acid sensors platforms for the improvement of fast and cost-effective detection systems with respect to DNA chip technology. 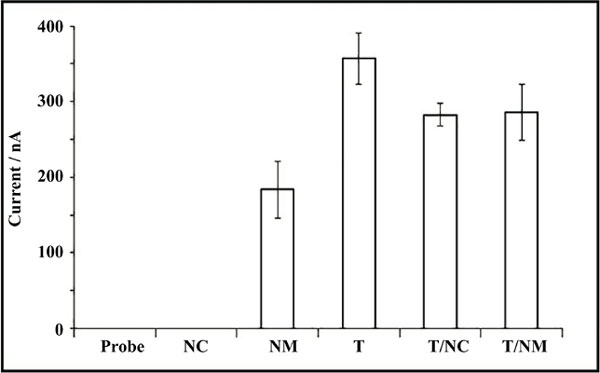