Background: Mercury (Hg2+) ion which is one of the most toxic heavy metals, can pollute the environment and threaten human health due to its features of non-biodegradation and bioaccumulation. Therefore, the detecting of Hg2+ ion is very necessary and has received increasing interest among researchers. The aims of this study is to developed a simple, sensitive and selective fluorescence probe for Hg2+ ion detecting.

Methods: In present work, we use boric acid as boron source, urea as the nitrogen source and citric acid monohydrate as the carbon source to synthesize boron and nitrogen co-doped carbon dots (BNCDs) by microwave heating method. At room temperature, different concentrations of Hg2+ ion were added into BNCDs solution. The fluorescence intensity of BNCDs was measured at an excitation wavelength of 360 nm. Results: In this study, the as-prepared BNCDs were characterized by multiple analytical techniques such as TEM, FT-IR, UV-vis absorption, XRD, XPS and fluorescence spectra. The BNCDs have exhibited high selectivity and sensitivity to Hg2+ ion with the detection limit of 2.3 nM. A good linear relationship was obtained between corresponding fluorescence intensity and the concentration of Hg2+ ion in the range of 0.0-22.0 μM (r = 0.996) under the optimal conditions. According to the UV-vis absorbance of BNCDs have a small blue shift with the increasing concentration of Hg2+ ion, the Stern- Volmer quenching constant (KSV) value decreasing with the rising of temperature, the lifetime of BNCDs have no change in the presence of different concentrations of Hg2+ ion, the quenching mechanism of the BNCDs-Hg2+ system appears to be mainly static quenching. Conclusion: The BNCDs were faultlessly synthesized by the microwave heating method in a short time, which was expedient and low cost. The as-prepared BNCDs could be used as a highly sensitive flourescent probe for the quantitative and selective determination of Hg2+ ion. The quenching mechanism between BNCDs and Hg2+ ion was primarily static quenching. This proposed method could be viewed as a fundamental exemplification for a specific nanosensing system towards heavy metal ions in biomedicine and environmental fields. 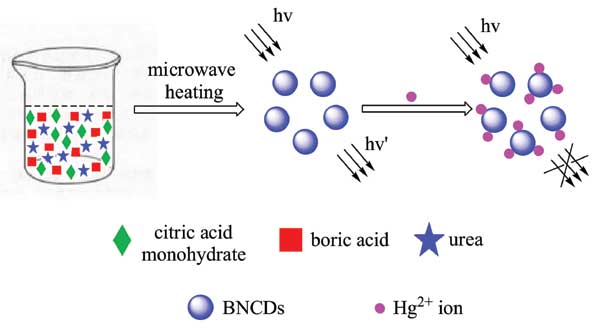