Background: Application of nanotechnology in wastewater treatment is the solution to cope with the conflict between people’s increasing demand for water and the world-wide water shortage. The main goal of this study is to prepare modified carbon nanostructures (CNSs) from sugarcane bagasse waste (SCB) as effective adsorbents for removing toxic Cr(VI) ions from their aqueous solutions.

Methods: The preparation of CNSs was performed via catalytic hydrothermal/carbonization of SCB. The resultant CNSs sample was oxidized by oxidation with HNO3/H2O2 (O-CNSs) and then followed by coating with diethylenetriamine (N-CNSs). Transmission electron microscope (TEM), scanning electron microscope attached to energy-dispersive X-ray (SEM/EDX), fourier transform infrared (FTIR) and nitrogen adsorption analyses were used to determine the morphology and surface properties of CNSs. Adsorption and desorption studies of Cr(VI) ions onto these modified CNSs were investigated. Effects of initial concentration of Cr(VI), pH of solution and temperature in the batch mode were estimated. Adsorption studies were analyzed by Langmuir, Freundlich and Dubinin- Radushkevich models. Pseudo-first-order, pseudo-second-order and intraparticle diffusion models were undertaken to follow the adsorption mechanism.

Results: The prepared samples composed of carbon nanotubes and graphene sheets were evident by TEM and SEM. The adsorption of Cr(VI) is exothermic in nature, well-fitted with Langmuir, described by pseudo-second order kinetic model and then is uncontrolled by intraparticle diffusion step. It was found that the adsorption of Cr(VI) was higher uptake over O-CNSs (56 mg/g) than that by NCNSs (44 mg/g). This was ascribed to that the first sample is enriched with acidic O-functional groups and possessed higher specific surface area (188 m2/g). Desorption studies were achieved by HNO3 and NaOH reagents for recovering the Cr(VI) from O-CNSs. Results revealed that about 90% of Cr(VI) can be recovered by HNO3 more than that by NaOH till the third run.

Conclusion: Two modified CNSs samples were successfully prepared from SCB. Adsorption of Cr(VI) is highly relied on initial concentration of Cr(VI), pH and temperature. The main factors controlling the adsorption behavior of Cr(VI) are the acidic functional groups and the accessible surface area on O-CNSs. Furthermore, the O-CNSs attained high stability in recycling tests for Cr(VI) removal. 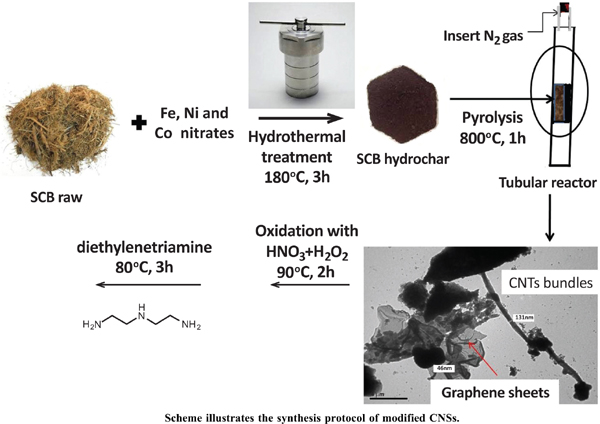