Removal of Toxic Dyestuffs from Aqueous Solution by Amphoteric Bioadsorbent


Background: Color effluents generated from the production industry of dyes and pigments and their use in different applications, such as textile, paper, leather tanning, and food industries, are high in color and contaminants that damage the aquatic life. It is estimated that about 105 of various commercial dyes and pigments amounted to 7×105 tons are produced annually worldwide. Ultimately, about 10-15% is wasted into the effluents of the textile industry. Chitin is abundant in nature, and it is a linear biopolymer containing acetamido and hydroxyl groups amenable to render it atmospheric by introducing amino and carboxyl groups, hence able to remove different classes of toxic organic dyes from colored effluents.

Methods: Chitin was chemically modified to render it amphoteric via the introduction of carboxyl and amino groups. The amphoteric chitin has fully been characterized by FTIR, TGA-DTG, elemental analysis, SEM, and point of zero charges. Adsorption optimization for both anionic and cationic dyes was made by batch adsorption method, and the conditions obtained were used for studying the kinetics and thermodynamics of adsorption.

Results: The results of dye removal proved that the adsorbent was proven effective in removing both anionic and cationic dyes (Acid Red 1 and methylene blue (MB)), at their respective optimum pHs (2 for acid and 8 for cationic dye). The equilibrium isotherm at room temperature fitted the Freundlich model for MB, and the maximum adsorption capacity was 98.2 mg/g using 50 mg/l of MB, whereas the equilibrium isotherm fitted the Freundlich and Langmuir model for AR1 and the maximum adsorption capacity was 128.2 mg/g. Kinetic results indicate that the adsorption is a two-step diffusion process for both dyes as indicated by the values of the initial adsorption factor (Ri) and follows the pseudo-second-order kinetics. Also, thermodynamic calculations suggest that the adsorption of AR1 on the amphoteric chitin is an endothermic process from 294 to 303 K. The result indicated that the mechanism of adsorption is chemisorption via an ion-exchange process. Also, recycling of the adsorbent was easy, and its reuse for dye removal was effective.

Conclusion: New amphoteric chitin has successfully been synthesized and characterized. This resin material, which contains amino and carboxyl groups, is novel as such chemical modification of chitin hasn’t been reported. The amphoteric chitin has proven effective in decolorizing aqueous solution from anionic and cationic dyes. The adsorption behavior of amphoteric chitin is believed to follow chemical adsorption with an ion-exchange process. The recycling process for few cycles indicated that the loaded adsorbent could be regenerated by simple treatment and retested for removing anionic and cationic dyes without any loss in the adsorbability. Therefore, the study introduces a new and easy approach for the development of amphoteric adsorbent for application in the removal of different dyes from aqueous solutions. 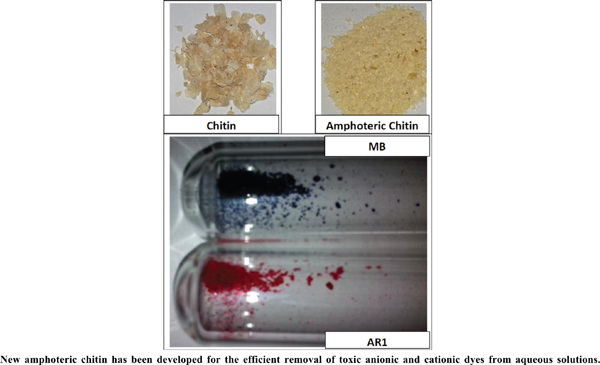