Sensitivity Enhancement of Pre-Capillary Chelation Method for the Separation of Metal Ions: Experimental and DFT Study


Background: Heavy metal toxicity has proven to be a major threat and there are several health risks associated with it. The toxic effects of these metals, even though they do not have any biological role, remain present in some or the other form harmful for the human body and its proper functioning. They sometimes act as a pseudo-element of the body while at certain times they may even interfere with metabolic processes. Sensitivity enhancement and selective pre-capillary chelation and separation method was developed for the simultaneous determination of metal ions by capillary zone electrophoresis (CZE) with UV light as a detector.

Methods: This method was based on the chelation of metal ions such as nickel(II), cobalt(II), lead(II) and zinc(II) with 2.0 mM Ammonium Morpholine-4-Carbodithioate (AMC) at pH 7.2 prior to analysis in 2.0 mM of phosphate buffer.

Results: Different optimal conditions such as the effect of pH, concentration of AMC, applied voltage, nature of the buffer solution and excipient ions were investigated to enhance the sensitivity of the method.

Conclusion: The developed method separate nickel(II), cobalt(II), lead(II) & zinc(II) in less than 5 min with good reproducibility and recoveries ranging from 93.50 to 100.00% in agricultural materials. Furthermore, the interaction and Density Functional Theory (DFT) based studies reveal that the metal ions form relatively stable complexes with AMC and follow the experimental trend performed with CZE. 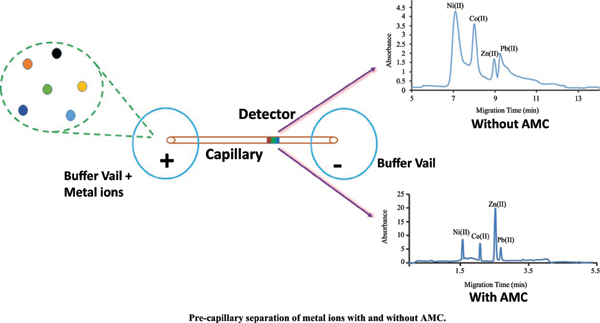