Background: Pollution in water is of concern because of its negative influence on human health and impact on ecosystems. Three-dimensional (3D) structures in the form of inverse opals and opals-like structures were constructed on a scale of millimeters for their use in the adsorption of heavy metals adsorption on manganese oxide-covered surfaces.

Objective: Manganese oxides both, as commercial powders and as synthesized coatings by the chemical bath method, have a high capacity of lead ions adsorption. The inverse opals and opals-like structures increase the contact area and regulate the flux.

Methods: The chemical bath method was used to coating surfaces of inverse opals and opals-like structures. The size of structures was proposed in millimeters to guarantee an easier flow of water.

Results: The manganese oxide deposits were predominantly constituted by an amorphous phase. The present crystalline forms were identified as γ − MnO2, ε − MnO2, Birnessite, and pyrolusite. The best adsorption was obtained with Mn(II, III) and Mn(II), with 91.4% and 80.6%, respectively. 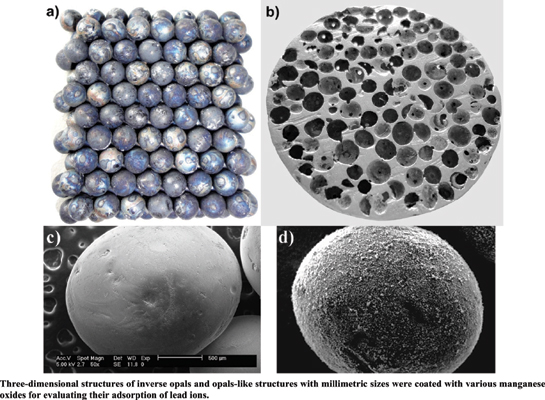