Background: Sucralose is a high intensity artificial sweetener and chemically known as 1,6-dichloro-1,6-dideoxy-β-D-fructofuranosyl-4-chloro-4-deoxy-α-D-galactopyranoside. It is used as a sweetener and flavour enhancer in foods and beverages. Due to its high stability at wider temperatures and pH, it made its applicability in various food products throughout the world. As per Joint FAO/WHO Expert Group on Food Additives (JECFA) in 1990, the daily intake of sucralose is 0-15 mg/kg body weight. The literature reports suggest that sucralose has a possible health threat due to the presence of chlorine groups, thereby leading to several illnesses. The growing interest in the use of sucralose (SCL) in the foods makes it necessary in developing a fast, reliable, cost effective and reproducible analytical method to determine SCL in food samples. The detection of sucralose and other carbohydrates like fructose, glucose and sucrose is a challenging task owing to its: (i) unavailability of the charged functions and (ii) lack of absorption of strong chromophoric nature in the UV region. Therefore, separation of non-absorbing neutral molecules needs a careful procedure with suitable electrolyte systems.

Methodology: An indirect UV detection capillary electrophoretic method is described for the separation of sucralose in different food samples. It was achieved by nucleophile substitution (SN2) in the presence of amine as background electrolytes. The morpholine buffer showed good buffering capacity in terms of migration time (< 8.0 min) and baseline stability when compared to other amine buffers (ethylamine, piperidine, triethylamine). The analytical applications of proposed method showed by recovery percentages of sucralose in real and spiked samples on intra and inter-day basis at optimum experimental conditions of 0.2 M buffer concentration and pH 12.0 at 230 nm UV detection.

Results: The selection of BGE, UV detection wavelength, buffer concentration, buffer pH, cassette temperature and applied voltage was optimized to enhance the sensitivity and selectivity of the separation method. Recoveries obtained were ranging from 96.87 to 98.82% for real samples and 94.45 to 98.06% for spiked samples, respectively. Linearity was studied in the range of 2-10 mM, and showed a correlation coefficient of 0.9942. LOD and LOQ were found to be 0.3804 mg L-1 and 1.5215 mg L-1 with % RSD (n = 5) ± 1.27 and 1.19% with respect to migration time and peak area. Furthermore, to better understand the separation of sucralose with amine buffers, were investigated computationally using HOMO-LUMO calculations. The obtained results showed that the band gap decreases in the presence of amine moiety irrespective of its nature.

Conclusion: In the study, a novel background electrolytic system was successfully applied to separate sucralose using indirect UV detector with capillary electrophoresis. The FTIR results confirmed that the interaction of sucralose with different amine buffers to better understand the separation chemistry behind sucralose and amine complexes. Moreover, computational results indicate that the direction of charge transfer from the amine functionality to the glucofuranosyl ring in each amine derivative of sucralose confirms the strong interaction between sucralose and amines, which led to the baseline separation of sucralose in different food samples. 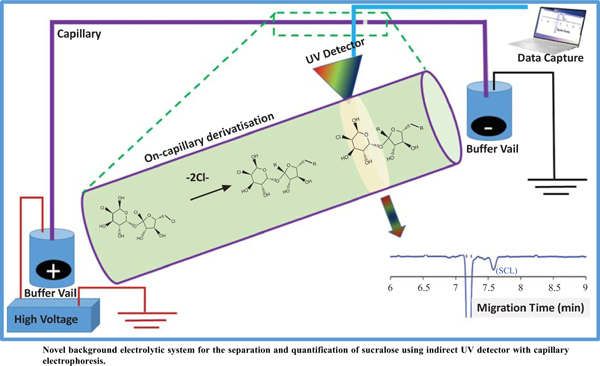