Background: The elemental composition of maize grains depends on the soil, land and environment characteristics where the crop grows. These effects are important to evaluate the availability of nutrients with complex dynamics, such as the concentration of macro and micronutrients in soils, which can vary according to different topographies. There is available scarce information about the influence of topographic characteristics (upland and lowland) where culture is developed with the mineral composition of crop products, in the present case, maize seeds. On the other hand, the study of the topographic effect on crops using multivariate analysis tools has not been reported.

Objective: This paper assesses the effect of topographic conditions on plants, analyzing the mineral profiles in maize seeds obtained in two land conditions: uplands and lowlands.

Material and Methods: The mineral profile was studied by microwave plasma atomic emission spectrometry. Samples were collected from lowlands and uplands of cultivable lands of the north-east of La Pampa province, Argentina.

Results: Differentiation of maize seeds collected from both topographical areas was achieved by principal components analysis (PCA), cluster analysis (CA) and linear discriminant analysis (LDA). PCA model based on mineral profile allowed to differentiate seeds from upland and lowlands by the influence of Cr and Mg variables. A significant accumulation of Cr and Mg in seeds from lowlands was observed. Cluster analysis confirmed such grouping but also, linear discriminant analysis achieved a correct classification of both the crops, showing the effect of topography on elemental profile. 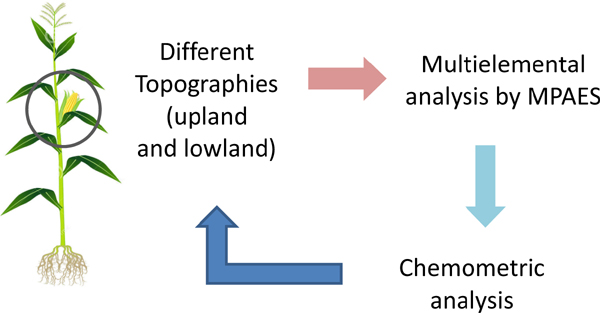