Background: In the last decade, research in the field of contaminants of emerging concern proliferated while special interest was focused on antibiotic-resistant bacteria, antibiotic resistance genes as widespread pollutants. Advanced oxidation processes have gained an essential attraction in the field of antibiotics degradation and bacteria inactivation

Methods: Photocatalysts in the form of sol-gel based TiO2-Ag-xerogel and green synthesized nanocomposites TiO2-Ag compared with regard to their bacteria inactivation performances and effect on antibiotic resistance behaviour of target strain. Experiments were carried out at parallel plate reactor configuration under UV-A irradiation with an energy equivalent of solar conditions. PEG 600 and Cydonia oblanga seed extract were used as chemical and bio-chemical reducing-stabilizing agents respectively for the synthesis of TiO2-Ag nano-composite. Results: Photocatalyst type/size based alterations in antibiotic resistance profile of intact and post treatment bacteria cells were examined. Besides the improvement in bacteria inactivation kinetics, photocatalytic disinfection with Ag doped xerogels and TiO2-Ag nanocomposites have triggered alterations on E.coli DSM-498 resistance to tetracycline and aminoglycoside antibiotics. Conclusion: Cydonia oblanga seed extract is proved to be a promising green substitute for the TiO2- Ag chemical synthesis procedure. Considering the aspects of the economic and environmental impact of nano-composite photocatalyst synthesis, cost reduction is achievable both in the sense of production and disposal. The complexity of water matrix must be considered in a way to determine the wide range applicability of the green synthesis of a nano-composite at the pilot scale. 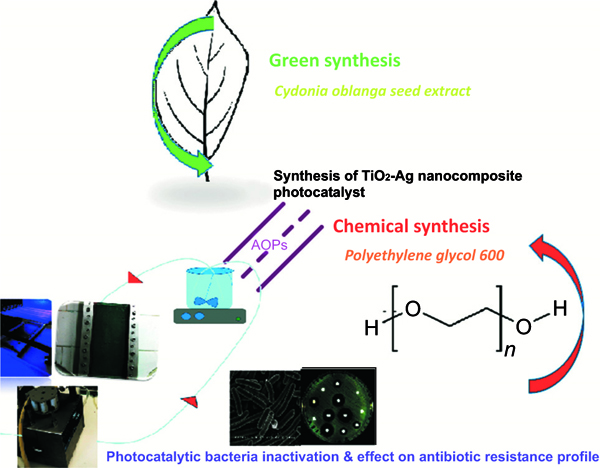