Objective: We found that thiosulfate catalytically enhanced the reaction of alcohols (such as, methanol, ethanol, and propanol) and Ce(IV). Utilizing this effect, we developed a new method for the determination of alcohols.

Methods: Alcohols were detected using the reaction of Ce(IV) with alcohols in the presence of thiosulfate and fluorescence detection of the Ce(III) generated by the reaction.

Results: In the presence of thiosulfate, an increase in fluorescence intensity was detected by injecting alcohol at concentrations of several millimolar, whereas it was not observed even at the concentration of 10% v/v (2 M for ethanol) in the absence of thiosulfate. The optimum detection conditions were determined to be 4.0 mM Ce(IV) sulfate and 0.50 mM thiosulfate, and the detection limit (S/N = 3) of ethanol under these conditions was 1 mM. In the calibration curves, changes in the slope were observed when the alcohol concentrations were approximately 10–25 mM. Using a thiosulfate solution containing ethanol as the reaction solution, a calibration curve without any change in slope was obtained, although the concentration of ethanol at the detection limit increased. The alcohols in the liquor and fuel were successfully analyzed using the proposed detection method as a postcolumn reaction.

Conclusion: This new alcohol detection method using a versatile fluorescence detector can be applied to the postcolumn reaction of HPLC omitting need of time-consuming pretreatment processes. 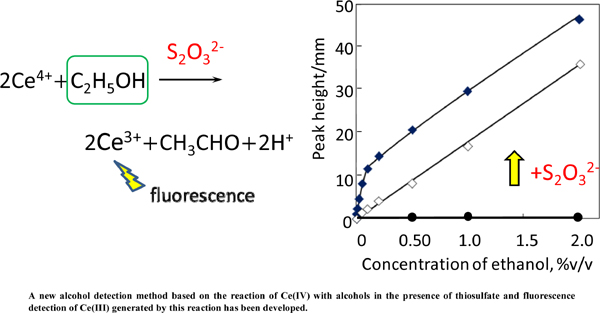